EZZ has achieved a significant milestone after being reclassified on the ASX as the genome-specialist looks to broaden its market share in the biotech and life sciences sector.

Aussie-listed genomic-tech firm, EZZ Life Science Holdings (ASX:EZZ) has had its listing changed on the bourse from retail to a pharmaceutical, biotechnology and life sciences company.

The reclassification comes as a birthday gift for the company, who marks their first year as a listed entity, having floated on the ASX on March 3, 2021.

Furthermore, the Global Industry Classification Standard (GICS) code for EZZ has been changed from ‘Distributors’ to ‘Life Sciences Tools & Services’.

EZZ has been recategorised as it continues to undertake genomic research and develop products in its four focus areas.

The change in listing classification is a major milestone for EZZ which has invested significantly into transforming into a fully integrated life sciences company and plans on a global expansion in 2022.

The global life sciences industry has been on the rise, growing more rapidly than ever over the past decade, with the pandemic only accelerating this growth over the last two years.

According to Coherent Market Insights, rising funding in the sector is expected to drive growth of the global life science products market, which is forecast to reach a value of US$4.7 billion by the end of 2027.

The Asia Pacific region has been a leader in the global life science products market, accounting over 42.6 per cent share in terms of value in 2019, followed by North America.

Domestically, health and life sciences is Australia’s eighth largest export sector, worth ~A$8.5 billion, with the industry benefitting from strong support from our top-ranking universities and governments.

The ASX-listed Australian life sciences sector is worth about A$100 billion and comprises about 100 companies. 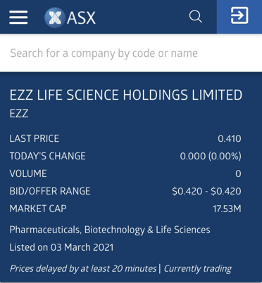 Profitable despite COVID disruptions
EZZ remains one of the rare profitable biotechnology and life sciences companies on the ASX, despite supply chain and severe logistics delays caused from the COVID-19 pandemic impacting revenues.

However, EZZ maintains a strong cash position. The company’s cash increased by 1% to ~$8.95m as of December 31, 2021, after distributing an interim dividend of 0.45 cents per share.

Overheads increased to support the development of eCommerce capability, maintain the company as an ASX-listed entity and explore opportunities for future growth.

EZZ continues to operate with nil external debt, other than property lease liabilities.

Plans to increase revenue
In its first year on the ASX alone, EZZ expanded its product range from three to 17 products, which are being sold in over 1,600 stores, up from 1,350 stores just 12 months ago.

EZZ has established four new distribution channels in the USA, Singapore, and China with more than 100 distributors.

Towards the end of December 2021, it also launched its online store to sell its products direct to the customer and initiated discussion with multiple rival eCommerce platforms that are expected to take market share from Tmall Global.

The company has entered Douyin, Pinduoduo and other mainstream e-commerce sales channels to make up for lost sales on Tmall.

EZZ has established a strategic partnership with Watsons, a healthcare and beauty chain store in Asia and Europe with 400 stores in China already selling its product range.

EZZ products are also set to enter ~7,000 convenience stores in China, while a rapidly growing TikTok community is also helping with organic growth.

The company anticipates sales to slowly increase during the second half of FY22 and has accelerated its strategic plan of factory acquisition to ease supply chain shortages.

It plans to expand distribution channels in Australia and New Zealand into further pharmacies and grocery retailers, while accelerating its direct-to-consumer strategy in the countries by setting up online stores on key e-commerce platforms.

Cross has more than 40 years’ experience in the life science sector domestically and internationally, including ~20 in senior executive roles.

EZZ is focusing its genomic research and product development to isolate and unpack four key areas including:

The company has entered local and international university partnerships to drive the momentum of research into human papillomavirus and genetic longevity.

While genomics is already being used extensively in cancer and infectious diseases, EZZ believes that it’s one of the first companies to focus on its four key areas.

EZZ to Launch Store on Chinese Version of TikTok

The EZZ Gastrointestinal Health Conference was held in Sydney.

Copyright © 2022 EZZ Life Science - All Rights Reserved
Back To Top